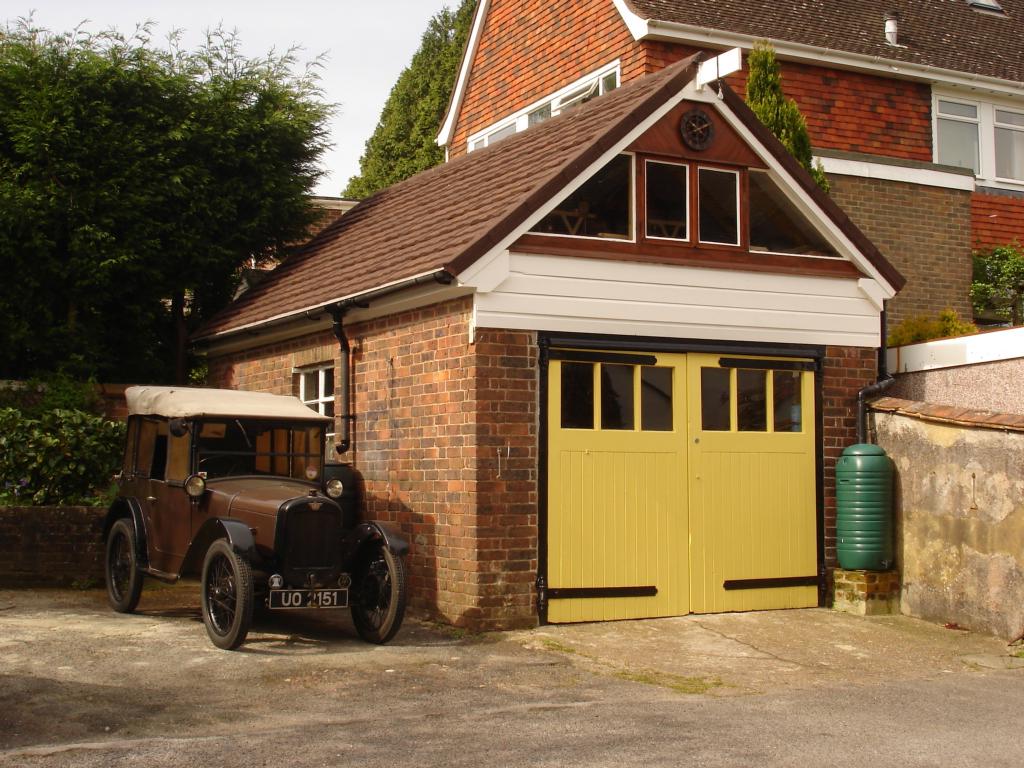 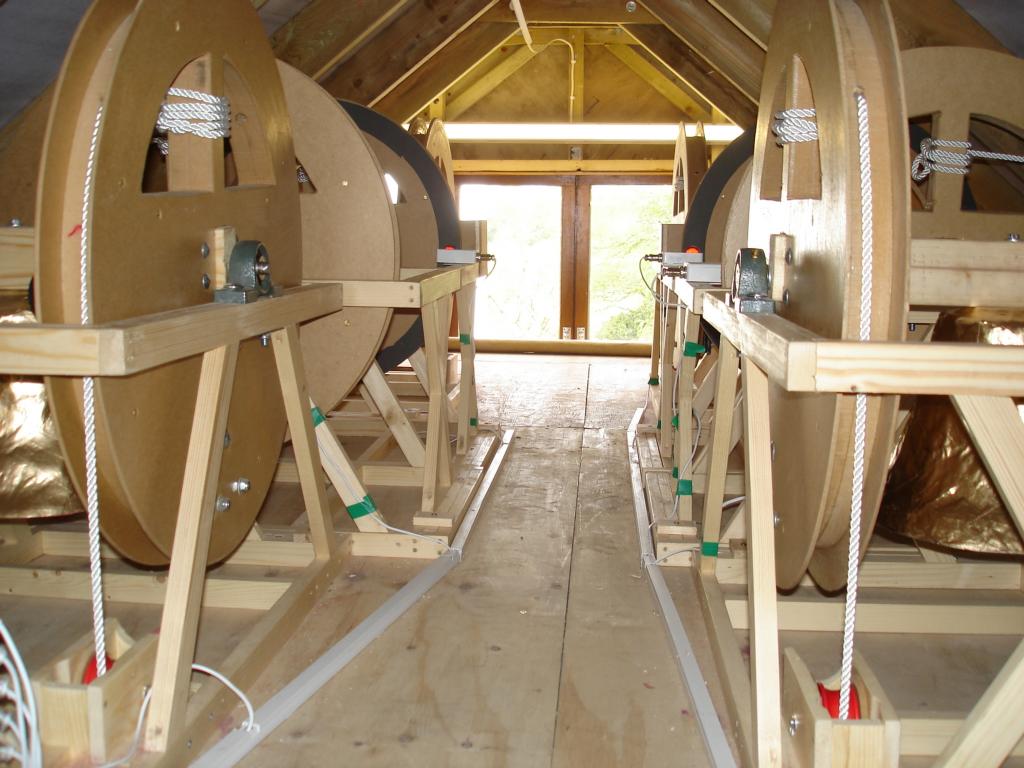 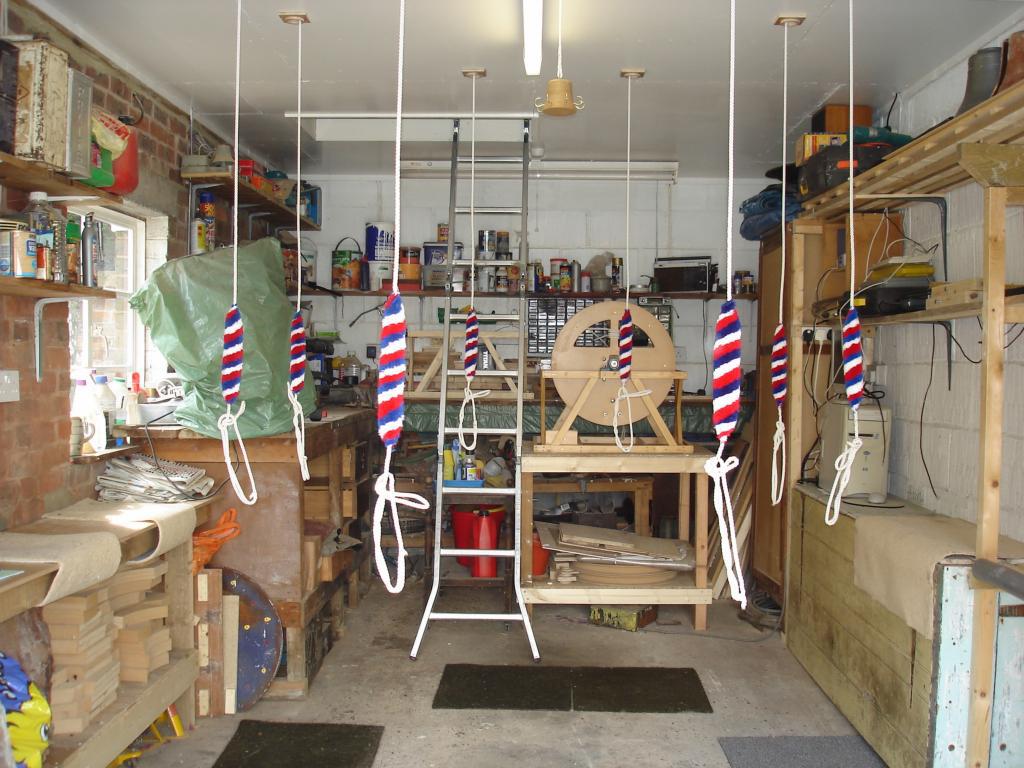 Views of the ring.


Alternatively known as the ‘Austin Eight’ after the Austin Seven that normally stands beneath it, the Wickham Ring comprises eight John Norris mini-dumbbells connected via Griffin photoheads and a marshalling box to two serial ports on a PC running Abel. There are no actual bells and the 'Ring' is thus technically a simulator rather than a true ring. It evolved out of a project to provide storage space in the garage by replacing the decaying flat roof by a pitched roof. It then seemed an obvious development to connect a set of dumbbells to ringing software to provide a ringing simulator.

The standard dumbbell design comprises a 23" MDF wheel, wooden headstock and papier mache bell hung in a wooden frame. The upper half of the wheel with pierced quadrants weights approx. 5 lb. The lower half weighs approx. 7 lb, plus 6 lb of attached steel weights to represent a metal bell. In the Wickham Ring the wheel flanges are graded slightly in thickness from treble to tenor and the papier mache bells are also graded slightly, giving a tenor weight approx. 15% greater than the treble. The equivalent weight of the tenor, allowing for the effect of the wheel as well as the added metal weight, is approx. 10 lb.

The design loosely represents a bell in a traditional frame and provides ample room for a bell of up to 10" in diameter. The existing papier mache bells could thus in the future be replaced by real bells, with a tenor up to about 20 lb, to create a true mini ring. [There are, however, no plans to do this in the foreseeable future.]

Details of Peals and Quarter Peals rung on the Wickham Ring.

Note: Peals rung on dumbbell rings, or on rings of real bells with tied clappers, are held by the Central Council to be ‘non-compliant’ with the Council's “Decisions” because the sound is generated from digitised recordings. Non-compliant peals are included in the annual analysis and report prepared by the Peal Records Committee but until now have generally been excluded from the statistical tables in the report. However, at the Central Council meeting held on 4 June 2012, the following motion was passed:-
“The Peal Records Committee shall include in its annual report a statistical analysis of peals rung by rope and wheel on dumbbell rings or rings of bells with tied clappers, provided that such peals comply in all respects with the Central Council’s Conditions for Peals, with the sole exception of the use of simulated sound in the absence of swinging clappers striking bells of metal.”
Peals rung on tied bells or dumbbell rings will still be regarded as non-compliant but they WILL now be included in the statistical tables.

More information on the background to this change

A note on the name "Wickham Ring":-
I have called the ring The Wickham Ring because of its proximity to Wickham Hill and the Domesday manor of Wickham, a small manor within Clayton whose name survives today in the the hamlet of Hurst Wickham and the farm of Clayton Wickham.

More information on the manor of Wickham